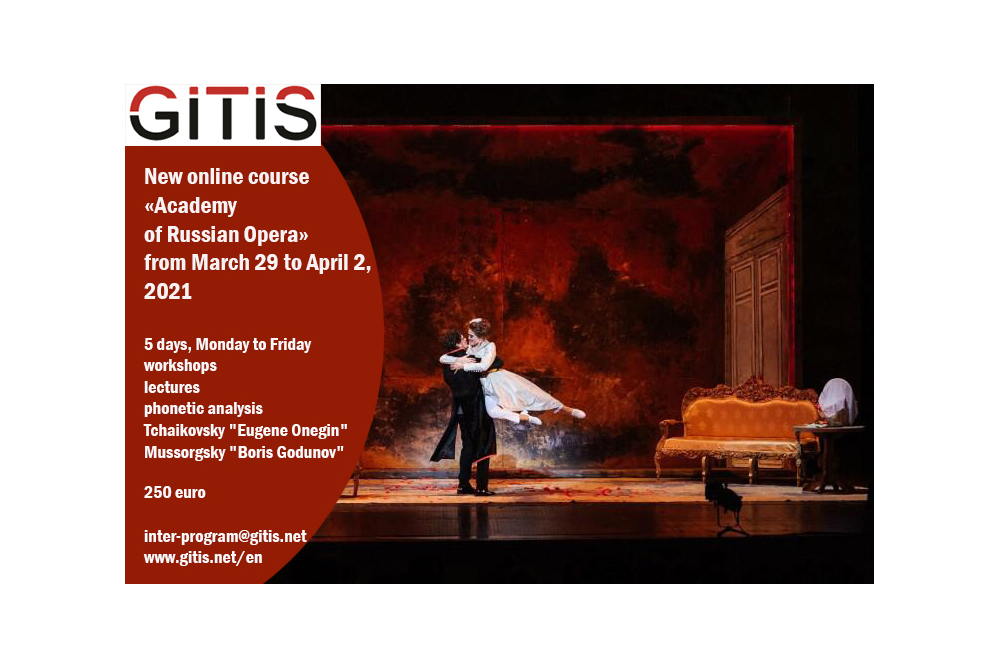 The new online course of GITIS “Academy of Russian Opera” focuses on working with singers currently studying at conservatoires as well as those at the beginning of their professional careers. Course participants will work under the guidance of leading GITIS professors, directors and famous singers from the Russian opera school. One of the unique and practical aspects of this programme is that each participant will receive a phonetic table for arias with audio accompaniment, a translation of each aria, as well as a re-recorded piano accompaniment for self-study.

Programme (to study during the course):

Professor Alexander Barmak is the Head of the course at GITIS of Musical Theatre Department.

He is an artistic director of the workshop of actors and directors of Musical Theatre, Honoured Art Worker, candidate of Art History, Professor, winner of the Boris Pokrovsky award “For the successful education of the actor’s shift”, the author of books and articles on the issues of acting and directing in the musical and drama theatre. Alexander Barmak is sung in theatres in Russia and the world, such as the Bolshoi Theatre of Russia, Boris Pokrovsky Music Theatre, Moscow Operetta, Children’s Musical Theatre. N.I. Sats, opera houses in Dusseldorf, Zurich, Stuttgart, etc.

Dmitry Bertman, Professor and the Head of Directing and Acting Musical Theatre Cair of GITIS, the founder and Artistic Director of the Moscow Musical Theatre “Helikon-Opera”, the People’s Artist of Russia.

“Aspects of vocal technique and interpretation of Russian opera”
Professor Dmitry Vdovin is Honoured Artist of Russia, Chevalier of the Order of Merit for the Italian Republic, National Opera Award “Onegin”.

He graduated from GITIS and V.S.Popov Academy of Choral Art. He began his teaching career at the State Musical Collage named after Gnesins, where he later became the head of the Vocal Department, then taught at the Russian Academy of Music named after Gnesins, at the Academy of Choral Art, where he was the head of the Vocal Department and is still a professor. Since 2009 he has been a director and a vocal teacher of the Youth Opera Programme of the Bolshoi Theatre of Russia.

Many times he was a member of the jury of prestigious vocal competitions — the Glinka competition, the F.Vinyasa competition in Barcelona, ??"Voices of Verdi" in Busseto, Grand Prix of Maria Callas in Athens, Viotti and Pavarotti in Vercelli, AsLiCo in Como (Italy), Moniuszko in Warsaw, competitions in Paris and Bordeaux (France), Competizione dell’opera Italiana in the Bolshoi Theatre and Linz (Austria), in Montreal (Canada), NYIOP (New York, USA), in Harbin (China), in Tenerife (Spain), “Nuremberg Meistersingers” in Germany, the competition of the TV channel “Culture” “Big Opera”, in Izmir (Turkey), Bul-Bul in Baku (Azerbaijan), Minsk (Belarus) and many others.

Among his students there are laureates of the most prestigious international competitions, leading soloists of the main opera theatres in the world, such as the Metropolitan Opera, La Scala, Covent Garden, Vienna and Berlin State Operas, Paris Opera, Real Madrid, festivals in Salzburg, Glyndebourne, the Bolshoi Theatre, Aix-en-Provence and many others.

“Phonetics and Pronunciation in Russian Opera Arias”
Alexia Mankovskaya is a singer, composer and coach.

She graduated from GITIS in 1992 (workshop of Alexander Titel and Igor Yasulovich). After graduating from the Masters at the Trinity Conservatory (London, UK) she successfully combined concert and teaching as a coach in pronunciation in opera /classical works of Russian composers. She has collaborated with the BBC Symphony Choir, the London Philharmonic Choir, the Grange Park Opera, the Souzbank Symphony and others. Founder and head of the chamber opera company “Opera at Home”, which produces opera productions annually, with the participation of graduates of the opera departments of the London Conservatories.

Please email inter-program@gitis.net if you have any questions about the course.

All sessions will take place online using Zoom. A Zoom link will be sent to you in advance of the course start date with further instructions.

To participate in online classes you will need the following:

If you have any questions regarding joining our online courses please contact sysadmin@gitis.net